I gave up doing plastic model kits many years ago, when I found my eyesight couldn’t really hack it – however, I recently acquired a great “hobbyist’s  friend” in the shape of the magnifier gadget pictured here. It has four sets of lenses, and built-in illumination.

So anyway, I got a notion to build and paint an OO/HO scale steam locomotive. I remember steam locomotives from my childhood, and particularly watching them during many (seemingly endless) warm summer holidays spent around Hest Bank near Morecambe.

One can of course still see steam locomotives which have been lovingly restored to their full glory, and preserved by teams of enthusiasts; but I wanted to model my memories. The steam trains of my childhood were late British Rail era –  dirty, leaking, rusty, soot-caked monsters.

Back in 1959 the company Kitmaster began to produce model kits for 00 gauge. In 1962, the brand was sold to Airfix, who re-introduced the model of a British Rail Class 4 locomotive known as a “Mogul” (because of its 2-6-0 wheel configuration). The moulding tools eventually became the property of Dapol who still sell this wonderfully detailed model kit. Of course, the moulds are now more than a little “tired”, and so there is some work to remove flash and correct slight moulding errors, but it remains a testament to the original modellers and mould designers.

Here is my finished model, which is around 2 inches tall (not including the display plinth) – click/tap the image to see it in detail.

And a couple more shots: 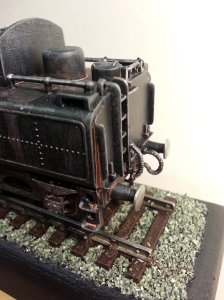 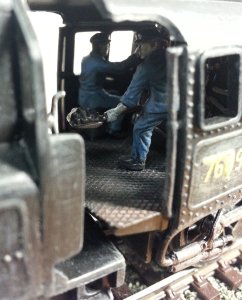 The British Rail Standard Class 4 locomotive numbered 76093 was built at Horwich Works, and entered service in 1957. It was allocated to the Corkerhill depot at Glasgow, and operated for 9 years and 7 months before being withdrawn and scrapped in 1967. Designed by Robert “Robin” Riddles and designated a Class 4MT (mixed traffic), 76093 would have hauled both passenger trains and freight.