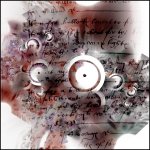 (2) base image with overlay added

A collection of scanned images taken from 16th Century manuscripts .

These high contrast images are designed to be used as overlays, adding texture to a base image.

Example: Starting with the base inage shown at top left, we add a new layer using one of the script overlay images, then set blend mode on the new layer to “burn”, and set its layer transparency to 50%.

Layer blending modes and transparency can be used to imprint text upon various areas of an image. Alternatively the overlays can be used as transparency maps to show or hide portions of another layer.

The Archives section of thia site includes some scanned images from things like old postcards. Copyright law on digitally redistributing such material is clear but largely untested:

“Photographic copies made of other two-dimensional works (such as old photographs, prints or paintings) in respect of which copyright has expired, do not create a ‘new’ copyright for the photographic copy. That is because the ‘new’ photographic image is merely a copy of on older original image, and copyright protection is only given to ‘original’ works, not rephotographs of original works (see AM26; for the report of a recent USA court decision to this effect, which has yet to be definitively tested in UK courts).”

However, in 2009, the National Portrait Gallery warned of possible legal action against Wikipedia, on the basis that high-quality photographic reproductions are recent works, and qualify as copyrighted works due to the amount of work it took to digitize and restore them. Because of this I only reproduce here low-resolution relatively poor quality scans. I maintain that the publishers of such postcards (if they are still in business) could not reasonably claim that what I am doing could in any way deprive them of any profit or other reward from their work in photographing the original. But I am happy to be proven wrong, so if anyone wants to claim copyright on any of this stuff, please contact me and I will immediately remove the offending material.

All of the media on this site that are created entirely by me are free to use under Creative Commons 3.0 Unported. Any exceptions to this are clearly indicated in context.
Loading Comments...
Comment
×