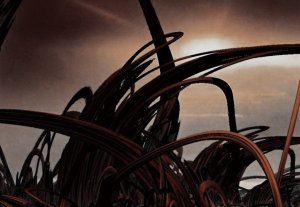 I wanted the picture to look like a page from a modern comic book. The popular film “300” took its visual inspiration from the comic book of the same name written by Frank Miller and illustrated by Lynn Varley, and I wanted to emulate those dark and brooding visuals in an “alien planet” science fiction scenario.

I first created a 3D fractal for the scenery, and rendered the scene in high contrast and highly saturated colours. The water was not blue enough in the original, so I separated out that section of the image and colourised it further. I used an actual photograph of a morning sky as the background.

I created the female figure from a wire-frame 3D model, then set up a lighting rig that would emulate a strong light coming almost horizontally from the far distance, just slightly to the left of the figure. The figure was then rendered against a “chroma-key” or “green-screen” background, which enables it to be composited into the fractal scene.

Reflections in the water were achieved by duplicating the figure, mirror inverting the copy, adjusting colour and transparency, and then manually editing the multiple layers before adding ripple effects.

Finally, I duplicated the entire image, and added a photoshop effect called “Aged Newspaper” to get the almost-monochrome final style.

Here is the finished piece, titled “Not My Sun” – (click on it to view full size): 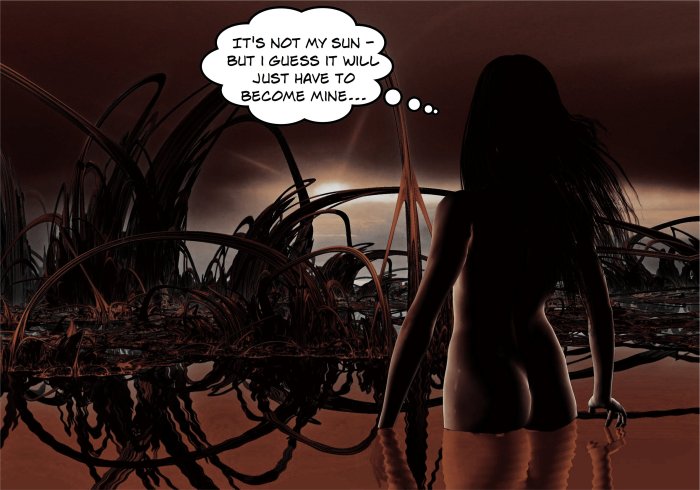