I drafted this little puzzle for my pal Eric, and he enjoyed it so much that he said why not blog it?

Whilst glancing at a clock the other day, a thought occurred to me that led to a simple puzzle which I enjoyed solving using the basic geometry and algebra that I learned in school. You may like to see if you can solve it yourself before reading my proposed solution below:

” At 12 noon and midnight, the hour and minute hands of an analogue clock are in line. At other times during the day they are also in line – but pointing in opposite directions to each other. The first time this happens after the noon alignment is some time shortly after 12:30 – but exactly what time is it ? “ 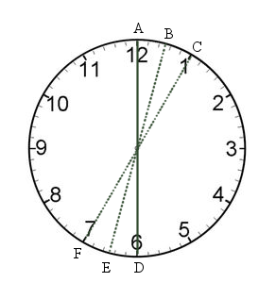 A clock face is a full circle, which by tradition in circular geometry is divided into 360 degrees.

Line BE represents what we don’t know – the position of the hands at the time when they are first in line after noon. 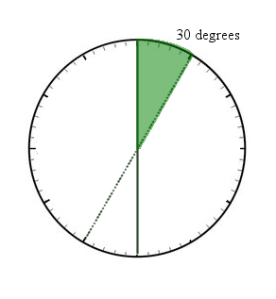 What we don’t know is the angle of rotation of the hour hand when the alignment happens. We will represent that unknown (in red) in Figure 3, and call the angle “X”: 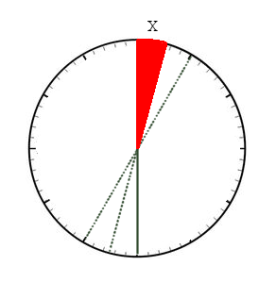 X is some fraction of 30 degrees that the hour hand has rotated, and we can express this as the fraction  X / 30

In the same elapsed time, the minute hand will have rotated some fraction of its full-circle travel (360 degrees) – to another unknown angle which we will designate (in blue)  as “Y” in figure 4: 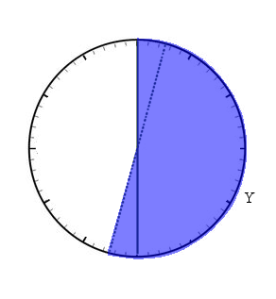 We know that the hour and minute hands rotate the same fraction of their respective hourly travel, and therefore: 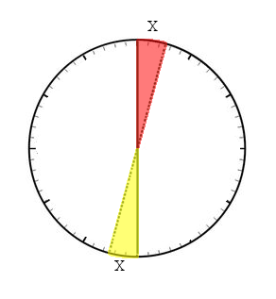 So, knowing that the rotation from 12 o’clock to 6 o’clock is half of the circle, or 180 degrees, we can say that: 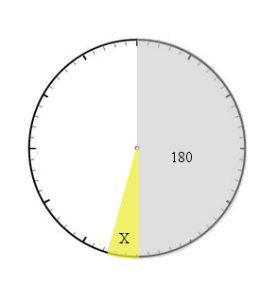 So now we have two simultaneous equations:

Which we can solve for Y as follows:

Simplify equation (1) by multiplying both sides by 30, giving

Substituting for X in equation (2) gives:

Multiplying both sides by 12 gives:

Subtract Y from both sides gives:

Divide both sides by 11 gives:

Now, recall that we are working in degrees, and the question asked for the time. So we need to convert degrees to minutes. One minute on an analogue clock face is represented by 6 degrees of angle, so therefore we need to divide by 6:

So the hands are first in line after noon at exactly 32.72 (recurring) minutes past 12 o’clock.

I’ll  leave it to you to show that in “old money” that would be: